What to expect when you're expecting NINE

If the powers that be in the 1980s thought that NINE differed enough from its source material, 8 1/2, that 6 months was added to the title.  Well, perhaps, if there hadn't been that Mickey Rourke/Kim Basinger movie, Rob Marshall's adaptation of the Tony award winning musical might have considered a further update: 9 1/2.  I'm not going to go into a full fledged review, as that is ultimately something I don't really feel comfortable doing (though I have and will probably continue to do even as I complete this post), but I do want to point out the ways in which the film is so very different from it's stage predecessor.  This means "spoilers" will follow.

1) The "concept".  Part of what made the stage NINE (hereafter "S9") successful was its highly theatrical concept.  Guido on a white tile stage on which sat all the women in Contini's life, commenting--if only with their continued presence--on the proceedings. Additionally, everyone onstage, aside from Guido and little boys, was played by a woman.  The movie takes a more naturalist approach, with men appearing in various roles and the women only appearing when they are actually in scenes (though sometimes they appear as realizations of Guido's imagination).  The musical numbers happen mostly in Guido's mind--often in justoposition to a "real life" scene--on the set of what is supposed to be his next movie, which is apparently Rob Marshall's CHICAGO.  (No wonder Guido is confused.)  But, snarkiness aside, I generally understood Guido's desire to envision his women's problems in a particularly glamorous and sexy way, even if the specifics of the device were a little fuzzy.  And despite a certain conceptual unclarity, the numbers are all gorgeously shot and contain the right emotional impulse and pay-off.

2) The score.  A lot is missing, including the title song, "Grand Canal", "Be On Your Own", "Only With You", "Simple", "Growing Tall", and one of my favorite songs of ALL TIME "The Bells of Saint Sebastian".  We did get 3 new songs, including a useless (if somewhat entertaining) go-go dance number for Kate Hudson and a bunch of sexy boys in skinny ties, a simple and pleasant song about dreams for Sophia Loren (in lieu of the title song) and a Kander-Ebb knock-off for Marion Cotillard (in lieu of "Be On Your Own").  The Cotillard number was the most interesting change for me.  Perhaps they didn't want Luisa--Guido's long suffering wife--to be saddled with 2 weepy ballads.  Her new song is a raunchy strip tease that is played against a more reserved book scene.  The combination is effective if the song itself is forgettable and the staging particularly reminiscent of CABARET.  There is also a lot of incidental music (assorted lounge singers and the like) throughout.  I'm not sure if Yeston wrote that as well, but it left little-to-no impression either way.

3) The Performances. Daniel Day Lewis is nothing short of incredible.  His inhabitation of Guido Contini is so thorough and complete that one hardly notices how thinly developed the stories of his respective women are--no matter how little time we the audience spend with his many loves, their effect on Contini is so clear and precise in Lewis' performance that we fill in whatever dramaturgical gaps were left behind.  Marion Cotillard makes the strongest impression of the women.  Partially because her arch was the most developed, but mostly because she's a damn good actress and her "My Husband Makes Movies" was wonderful (and aided greatly by Marshall's treatment).  Judi Dench as Lilliane LaFleur (Guido's agent in S9, but an Edith Head-esque costume designer here, a change which seemed unnecessary at first, but makes complete sense in context) also scores well with her particular blend of criticism and advice.  And she makes fine use of "Follies Bergeres", a song I have never been all that fond of.  Penelope Cruz is infectious as Carla--Guido's mistress--and makes a fine vamp in her "Call to the Vatican".  Nicole Kidman's role was reduced to a scene on the film set followed by an adequate rendition of "Unusual Way", which is a beautiful song, but not too effective without any context or backstory to support it.  Fergie sings "Be Italian" (another non-favorite of mine) magnificently, even if the number features the most loathsome musical-theater cliche--tamborines, blech--while officially making "sexy dancing on black, wooden, arch back chairs" the SECOND most loathsome musical-theater cliche.  Every second Kate Hudson is on screen is useless.  Not because she lacks talent, but because her character is not an asset to the story in any way.  It's as if Serena van der Woodsen fell in a rabbit hole and ended in 1960s Italy...with gogo dancing boys in oft mentioned skinny ties.

4) Back to the title for a moment.  The show is called NINE because adult Guido is constantly at a battle with childish impulses, behavior, and memories vs Grown-up responsibilities.  In S9, little Guido talks Grown-Up Guido out of suicide (with the lovely "Growing Tall", perhaps the number I missed most from the film).  Here the child is used much more sparringly.  Though I think Marshall ultimately gets the point accross, it all seems a little underplayed to me, considering that little boy is basically the title role.

But squibbles and squabbles aside, NINE is a lush and decadent movie that is thankfully bringing public attention to a brilliant--if often overlooked--musical.
Posted by Donald at 3:21 PM No comments: 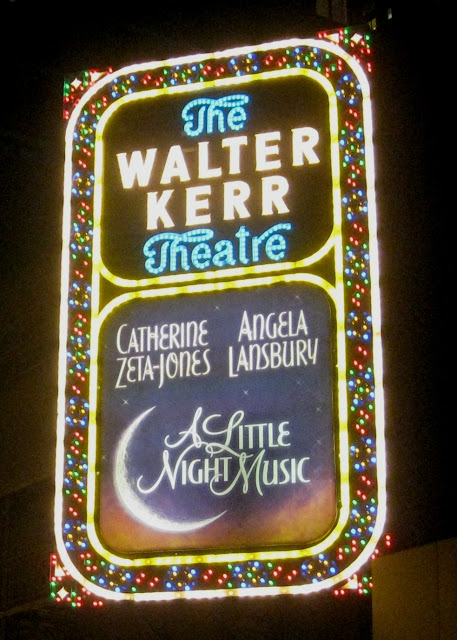 Last night I saw the current Broadway revival of A LITTLE NIGHT MUSIC (currently in previews).  Those of you who have been reading regularly (both of you) may know that this production has been somewhat of a fixation for me, particularly with respect to casting and the mere existence of her majesty, Angela Lansbury.  Overall, the production was beautiful--I found the set to be elegant and versitle, the costumes stylish and flattering and the lighting atmospheric and slick.  From my vantage point in the top balcony, I also appreciated teh nuanced sound design, with the faintest of ambient noises being piped into different speakers.

The big question on everyone's (i.e. both of yours) minds is probably, "How is Catherine Zeta Jones"?  I would consider her performance a success.  She had an appropriate gravitas and landed most of her zingers squarely on target.  If I felt she pushed a bit hard at times (singing "The Glamorous Life"'s slight melody like it was "Don't Rain on My Parade" and "Send in the Clowns" like it was "Memory"), she possesses and embodies all the requisite charm and glamour and will no doubt only continue to grow in the role.

Angie is, of course, delightful, though there was something off in "Liaisons".  I don't know if it was an interpretive choice or an error (or a combination of the two), but the rest of her line readings were particularly devastating and hilarious.

Anne (Ramona Mallory) and Henrick (Hunter Ryan Herdlika)--both young unknowns--were quite delightful.  They both had strong voices that handled the difficult and rangy music without grating, quirky and endearing personas, and legitimate chemistry onstage.

The casting of Aaron Lazar and Erin Davie as Count and Charlotte Malcolm had me scratching my head when it was announced--the Count is usually a more pompous/bombastic presence in the vein of Mark Kudish or, in another time, Robert Westenberg while Charlotte is a wry, one-liner machine--I trusted there was some concept or idea that justified the casting of the two young pretty people.  It seems the couple is envisioned as a nouveau, status conscious couple--I was reminded of Pete Campbell and his calculating wife, Trudy, on MAD MEN.  Lazar's Count seemed more naive and entitled than pompous, but it was a shift that worked for me.  Vocally he was spot on, and he takes his shirt off in Act 2.  No complaints.  I've been a fan since I saw him in PIAZZA and am more than willing to renew my membership dues to his fan club.  Davie surprised me with her depth and wit in act 1, and her "Every Day A Little Death" was perhaps the most musically satisfying renditions of the song I've heard.  I was less convinced with her as the scheming seductress in Act 2, but perhaps she will settle in over time.

My only complaint was that the production seemed awfully heavy.  Many of the songs felt over-interperated to me, acting on some belief that if the lyric was slowed down and said with greater emphasis it would mean more.  It's a choice, but I felt many songs--particularly all of the brief numbers for the ensemble--felt ponderous and at odds with the natural lilting momentum of the music.  I felt, overall, that the evening could have somehow been more "wonderful" and "enchanting", but was nonetheless engaged throughout (each act flew by even though they both clocked in at more than an hour each).
Posted by Donald at 5:58 PM No comments: