...this time about Julie, rather than Judy. In 1972/73 Julie Andrews had what it seems most people who could carry a tune and/or owned character shoes had, a short lived variety show. Though THE JULIE ANDREWS HOUR seemed to be well recevied in some circles--receiving Emmy Awards in 1973 for Outstanding Variety Musical Series and Outstanding Directorial Achievement in Variety or Music--ABC cancelled it not long thereafter. I'm assuming by that point the bloom was off the rose for the Variety Show in general, and Andrews' biggest successes were several years behind her.

This first clip is a medly of Cass Elliot hits sung with Mama Cass herself. I've always loved Cass' voice, and it pairs quite nicely with Andrews' perfect soprano.

Here's a clip of Andrews with the real Maria Von Trapp. The laugh track is quite offensive, but Von Trapp is adorable as she teaches Andrews how to yodel!

Here is an epic compilation video. I haven't actually watched all of it, but the best part is at the top, a bizzarre production number out of "I'm Late". There are many men in rabbit costumes. Again I say, variety shows are WEIRD.

Posted by Donald at 8:01 PM No comments:

there is a movie coming out called THE BIG GAY MUSICAL. The least I can do is show the trailer.

And, while I'm at it, the trailer for OY VEY, MY SON IS GAY (which features John Lloyd Young and Lanie Kazan!)

Before the Parade Passes By

Apparently all roads lead to Channing these days. I had wanted to look up some different YouTube renditions of "Is a Parade in Town" from ANYONE CAN WHISTLE, but none existed (aside from a solo cello version and a poor college choir Sondheim medley). It's not a far stretch to go from there to "Before the Parade Passes By", long my favorite song in the show. However, aside from a bad community theater production I saw years back, I have never seen the FULL number (with scene and all). Luckily, some kind soul posted it from the 1994 revival, starring Ms. Channing herself. Sadly, embedding is disabled (what does that accomplish exactly?), so I'll have to link to it HERE, but some things I want to point out/discuss:

1) Amusing Channingisms include: "Rum toddy" at 1m30s, her deliberate "oak. leaf." at 2m, "without colah" at 2m20s, how slowly she says "I have decided to rejoin the human race..." starting at 2m50s, the way she drives the point "Harmonia Gardens at 8 o'clock" at 8m30s (and the rest of the speech that follows)
2) I was surprised at how sensitively written this monologue was. I'm sure it's mostly Thorton Wilder (it feels very OUR TOWN), but it's not every musical theater leading lady that gets a monologue like that.
3) Though he was revered in his day, I don't think Gower Champion quite gets his due any more. Certainly the old guard understands, but, as a member of "the next generation" I have to say the extent of his talents has never really been appreciated by--or fully communicated to--me. He's been overshadowed by the "innovators" like Harold Prince, Michael Bennett, and Tommy Tune, while his innovations are negated by the fact that his hit shows (DOLLY, BIRDIE, 42ND STREET), get black marks for being silly stuff appropriate only for schools and stock. But notice the brief dance interlude that brings in the Irene Malloy scene (starting at 3m50s) before vanishing into the ether. Very remniscent of the girls at the barre appearing during "At the Ballet". And the staging of the parade proper (begining at 5m) is actually fairly conceptual. We don't get a linear parade, we get disparate elements gradually filling the stage until Dolly herself leads the winding parade around the pit, blurring the lines between the pedantic parade that much of Act I anticipates, and some sort of limbo in Dolly's mind (before such a thing existed in CABARET).

Watching this number makes me think that perhaps a DOLLY revival should be eminent, though I do have greater concerns over who should play Gower than who should play Gallagher-Levi.
Posted by Donald at 10:40 AM 1 comment:

More About The Judy Garland Show

Still reading the book about the Judy Garland show I mentioned earlier, and, as I assumed, shit has started to hit the fan. Judy was more openly hitting the sauce, stopped coming to the set until a day before (or the day of) taping, then most of the producers and writers were fired (with no other than Norman Jewison being brought on to finish off the season as Executive Producer). The week Liza was to make her first appearance, Judy was wildly enthusiastic...about Liza. When Mel Tormé (author of the book and writer of the musical material for the show) tried to teach Judy a snazzy version of "Put on a Happy Face, " Ms. Garland said "give it to Liza." And they did. I have yet to see a production number from a variety show that I didn't think was super-weird, and this is no exception, but Young Liza really is a sight to behold. The video starts off with mother and daughter singing "Together Wherever We Go". Then Judy leaves Liza, who acts forlorn as the stage revolves to reveal a bunch of white globes on sticks with painted smiles and bowler hats (like I said, WEIRD). Then Liza--still "sad"--says, "here goes nothing," does a spin and starts singing and dancing her face off. The musical arrangement is actually a lot of fun with new A-section (or "verse"?) which really sounds like it was written for Judy and a jazzy choral arrangement of the familiar tune as Liza dances with a bunch of boys in white sweaters over striped gondolier shirts. Did I mention variety-show production numbers are weird?

Posted by Donald at 2:09 PM No comments: 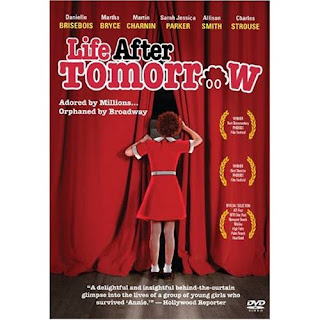 Among the litany of recent theater-related documentaries is a gem called LIFE AFTER TOMORROW. The subject: former Annies (and other orphans) from the original Broadway production and associated tours. Though they do not interview Ms. McArdle, Sarah Jessica Parker (along with many others you haven't heard of) give extensive interviews detailing the highs of the ANNIE experience and the lows of coming down. I was not really aware of the extent to which ANNIE was a national phenomenon (I can't think of anything even remotley equivilant today), and the idea that this kind of insane over exposure (even for later-in-the-run Annies) fell upon 10 year old girls, I'm surprised they didn't all become drug addicts. Perhaps they did. Of course, ANNIE is a show you love to hate and hate to love, and the idea that the 2nd squeaky-cleanest show of all time (falling behind SOUND OF MUSIC) has a dark side is inherintly alluring. I hadn't yet realized how powerful an insitution ANNIE had been, to create an entire culture and workforce that was an island into itself, requireing girls with no other opportunities available for them. Now with shows like 13 and SPRING AWAKENING there's a bit of an intermediary step between ANNIE and waiting for adulthood to begin, but for the most part these ANNIE alumns had no choice but to return to normal life. Other shows simply did not exist--certainly not in numbers large enough to employ the number of girls kicked off the ANNIE bus. The movie is quite effective and entertaining and ideal for lazy mornings while you wait for the Excedrin to do its magic.

You can watch the movie for free online (with some annoying commercial interruptions) here, or you can probably catch it on Ovations, rent it, or find it elsewhere on the interwebs.
Posted by Donald at 10:05 PM No comments:

This strange 1980s miniseries of ALICE IN WONDERLAND came up in conversation last night, specifically Ms. Channing as the White Queen. Though I generally remember the movie, I really didn't have any specific memories of this scene. I think I must have blocked them out, because this is simply too weird to be forgotten. But, as weird as she is, I can't help but think how fantastic she must have been to see live in HELLO, DOLLY!

At a great used bookstore near Waterford, I discovered THE OTHER SIDE OF THE RAINBOW WITH JUDY GARLAND ON THE DAWN PATROL by Mel Tormé. Yes, I've gotten some flack for carrying around the GAYEST BOOK EVER (if the title weren't enough, check out the cover): 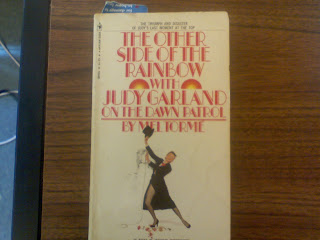 But it is turning out to be a fascinating read. Though I've enjoyed all the Judy things I've seen, I've never really been a fan of her, with any knowledge I have of her coming from my friend-since-childhood Marissa and a couple of Bio-musicals I came across during my days as a script reader for Barrington Stage. But this book appealed to me because it focused on Tormé's trials and tribulations working on THE JUDY GARLAND SHOW--think DIARY OF A MAD PLAYWRIGHT, but about Judy Garland instead of LEGENDS!. Thus far I'm only 50 pages in (they have just finished taping the first episode, episode two will be delayed a week, a few minor Garland outbursts), and Tormé proves to be a good writer and the book offers invaluable insight not only into Ms. Garland, but into the weird and wonderful world of the 1960s variety show, and Hollywood in general. Not being all that up-to-date on Garland-lore, I stand to be genuinely surprised as to what happens and the book progresses (though I realize it will be something devastating or tragic or whatnot). To keep some element of surprise, I am resisting the temptation to watch EVERY CLIP of the show I can find on YouTube, only allowing myself to seek out that which is explicitly mentioned in the book. I anticipate posting about more about Garland in the future. Here is Judy Garland singing "Old Man River" as part of a "trunk" segment at the end of the first episode.