Being a musical theater fan can be lonely when you enter the wider world of pop culture. You really feel off the grid, as it were. With WILL & GRACE off the air, tv doesn't make show-tunes jokes, and the blogersphere (aside from those specifically devoted to it) tends can rarely be convinced to mention it. But Overheard in New York did have the following amusing MT-related post that just made my heart sing:

Young man: So I told her, "shut the hell up, you fucking bitch!"
Older woman: Jeez, how many times can you be in a homicidal rage over
musical theater?--A Train

I particularly enjoy this quoteation because I can relate. In fact, if I hadn't known for a fact that it's been weeks (if not months) since I've ridden the A-train I would have wondered if I was the Young Man in question. Recently a friend from high school (who was a little bit in love with me at the time...it didn't work out, natch) sent me an excerpt from her HS-era livejournal in which she recounted a conversation we had about international warfare starting because of violent reactions to the SIDE SHOW original cast recording.

In answer to Older Woman's question--the day folks like me STOP finding themselves in a homicidal rage over musical theater marks the death of the industry, and it won't happen on my watch.
Posted by Donald at 12:56 PM No comments:

Even though we ain't got hat or badges...

All of the below attended a Theater Blogger's Social. The event, hosted by Ken Davenport, was quite exciting. Though I have to say, my favorite part was when Mr. Davenport suggested something and about 10 people instantly commented on it. It was very meta. 2nd favorite moment was when someone asked the group who had twitter. Not only did most people raise their hands, but at least 2/3rds of them admitted they had tweeted since arriving at the social. (ps: I now tweet as doenahld).

Below is a list that has been going around (not sure where it originated):

and the world will know
Posted by Donald at 5:59 PM No comments: 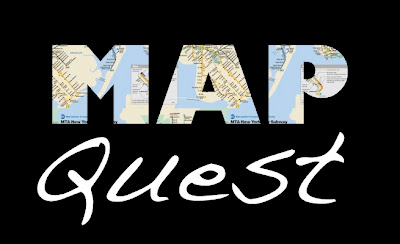 Presented as part of Prospect Theater Company's Dark Nights Series, MAP Quest is an evening of short musicals inspired by intriguing locations in NYC. This fantastic group of writers began working on these musical theater nuggets a scant 2 months ago, and the results are charming, witty, moving, and, most of all, totally original. Performances are:
Saturday 25-April @ 3:13pm
Sunday 26-April @ 7:15pm
Tuesday 28-April @ 7:15pm
for complete more info the performances, tickets, and the writers, click here.

And here is cast member Sarah Corey singing "What You Don't Know About Women" with A'lisa D. Miles at Dark Nights event from Prospect's winter show. (I had really wanted to show her singing "Meadowlark", but realize that song--though beautiful--is a rather large time investment for those of you pretending to be "working".)

Posted by Donald at 8:36 AM No comments:

This was posted outside the Dekalb stop on the B/Q/R in Brooklyn. Not pictured is a diagram of a brain (from wikipedia no doubt) and a page from a "Dr.'s report". It's actually really sad to think that this person believes all these things are happening to. Or maybe I'm just being sympathetic since I saw NEXT TO NORMAL last night (which was fan-fucking-tastic). 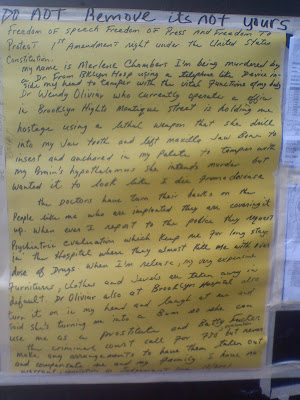 it reads (I've tried to stay true to her punctuation/capitalization/etc):

Freedom of speech Freedom OF Press And Freedom TO ProtesT 1st Amendemnt right under the United States Constitution.

the Doctors have turn their backs on the People like me who are implanted they are covering it up. When ever I report to the police they request Psychiatric evaluation which keep me for long stays in the Hospital where they almost Kill me with over dose of Drugs. When I’m release, my very expensive Furniturs, clothes and Jewels are taken away in default. Dr Oliviar also at Brooklyn Hospital also turn it on in my head and laugh at me and said she’s turning me into a Bum so she can use me as a prostitute and Batty Fucker

the criminal court call for 730 evaluation but never make any arrangements to have them taken out and compesate me and my family. I have no warrant, conviction or Judgement since 12/2001

a brief discourse on Sammy D

richagram: that sammy daivs 70s musical thingwas RIDICULOUS
me: right?
richagram: What's it from?
me: Sweet Charity
richagram: ahh...never seen it.
sammy davis jr converted to Judaism?
me: yes i beleive so
richagram: I see
He did
I did a project on him
for Sunday School
a very long time ago
and at the end of the report
I said he was still alive
and my teacher laughed
and I learned the lesson of not trusting books.
me: hahahahahahaha
richagram: bbut I do know about the glass eye
Posted by Donald at 5:29 PM No comments:

I also feel like I'm just now discovering that Sammy Davis Jr. was awesome. Better late than never I suppose

I just saw EVERYDAY RAPTURE (pretty good, didn't LOVE it), so I naturally looked up Ms. Scott on YouTube. Apparently I haven't done this for awhile, because in October 2008 someone uploaded a shit ton of videos from the original LAST 5 YEARS. The below is probably one of my favorite songs of all time, but I always thought, as I listened to the cast recording, that this should wouldn't gain anything by being put up on stage (as opposed to exisiting only in record form). This video pretty much confirms my suspicions. Watching people pretend to talk to people who aren't there is not fun (and so SONG AND DANCE), and the physical production is a bit of a mess. And what's with that lipstick? Anyway, here's "I Can Do Better Than That"

Posted by Donald at 7:41 AM No comments:

video from god knows where pointing out Disney's tendencies to essentially copy/paste sequences from movie to movie with different characters (and it doesn't include any direct-to-DVD sequels).

Posted by Donald at 5:15 PM No comments:

Taylor Through the Ages

Sometime between winning the Tony for YOU'RE A GOOD MAN CHARLIE BROWN and going off the deep end, Kristin Chenoweth sang this adorable song called "Taylor the Latte Boy." (I think there could be a drinking game with this wherein you drink every time the camera pans the fake flowers, and every time Kristin makes an overly broad musical theater gesture with her forearms.)

This was pre-YouTube, but during the heyday of Napster, so I had it in MP3 form (and listened to it...obsessively) for years. It was writers Zina Goldrich and Marcy Heisler's claim to fame for yawhile (and pretty much the reason DEAR EDWINA got an off-Broadway run or Junie B Jones got written, which in turn is the reason 25% of the city's waitstaff has their Equity card). Every girl with a belt and comedic timing put it in her book. College Cabarets were never the same.

Then some years passed, K. Chen was in WICKED, dated Aaron Sorkin, fancied herself a movie star, lost the big hair and hooker red lipstick, and released an album called "As I Am" featuring songs about Jesus...and "Taylor" (which she had never actually recorded before). But it is clear that the only person Chen-bot is worshipping is herself, and "Taylor" suddenly has a new bridge and an extra chorus.

For herself she made it triple, and she doesn't think I knew. (By the way, giving someone 50% more caffene than they are asking for is kinda dangerous...).

Here she is singing the new version on Craig Ferguson (in front of a grand piano, so no flowers, but just as many broad MT gestures and a lot more mugging). I really hate the bridge. HATE!

Sometime after that some guy who works at Disney World did this fairly funny parody (which, by the way, includes the new bridge and chorus).